We have many data structure classes in Collabora Online. Most of them are complex enough to warrant unit tests for their correctness. We already have cypress tests in Online which does integration testing, but we need unit tests for the internal data structure classes too. Mocha testing framework is a good match for this. With this we can do asserts via its BDD interface. In fact we could use any assertion library like Chai or Expect.js. You can now add Mocha tests in Online to test its any existing typescript classes or functions.

How to add a new Mocha test to Online?

Lets write a new test for the function CBounds.parse() as an example:

Recently I implemented FOURIER() formula for LibreOffice Calc that computes Discrete Fourier Transform [DFT] of a real/complex data sequence. Computation is done using a couple of Fast Fourier Transform algorithms (all implemented from scratch). I’d like to thank Collabora Productivity for a fully funded hack week and lots of encouragement that enabled me to work on this feature.

The syntax of the formula is :

The third argument “Inverse” is a boolean flag to indicate whether an inverse DFT needs to be computed. This argument is optional and the default value is FALSE.

The fourth argument “Polar” is a boolean flag to indicate whether the final output needs to be in polar coordinates. This argument is optional and the default value is FALSE.

The fifth argument “MinimumMagnitude” is a numeric argument and is used only if Polar=TRUE. All output components(frequency components if Inverse=FALSE) with magnitude less than MinimumMagnitude will be suppressed by a zero magnitude-phase entry. This is very useful when looking at the magnitude-phase spectrum of a signal (especially when its spectrum is sparse) because there is always some very tiny amount of rounding error when doing FFT algorithms and results in incorrect non-zero phase for some non-existent frequencies. By providing a suitable value to this parameter, these non-existent frequency components can be suppressed. The default value of this parameter is 0.0, so no suppression is done by default.

Below is a screenshot of a sample usage of FOURIER() formula.

Note that the Polar argument is set to 1, and MinimumMagnitude is set to 1E-10, to suppress the non-existent frequency components due to rounding errors. The plots here just visualize the data. The top plot shows the time-domain waveform and the next two plots represent the magnitude and phase spectra.

A Fourier analysis tool is also added to Statistics menu. All features of FOURIER formula are available graphically in this tool. Here is a screenshot of Fourier Analysis tool in action. 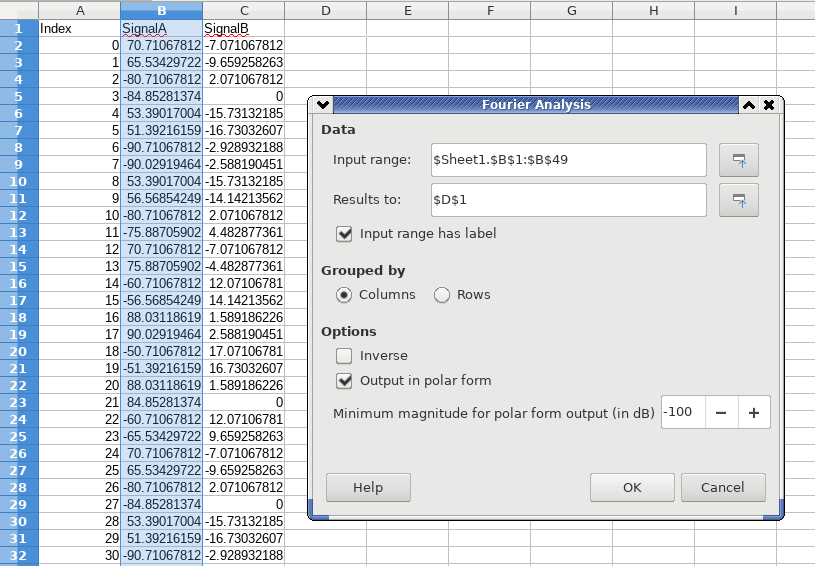 Both algorithms have asymptotic time complexity of O(N lgN), but Bluestein’s algorithm is much slower in practice. However many optimizations are in place to make the computation faster, especially when the input sequence is purely real.

Below are the patches that shows the evolution of the implementation of FOURIER formula over time.

Below are some perf measurements for various input cases. These numbers are only for the DFT computation part and does not include the time for writing data to the spreadsheet model. We don’t use multi-threading yet for FOURIER, so these are numbers for just one cpu-core.

Recently I added the support for doing multivariate regression in LibreOffice Calc via its regression tool along with other related improvements. Now the regression analysis output includes a lot more statistical measures including confidence interval for all estimated parameters.

The improved regression tool in Calc can be accessed via Data > Statistics > Regression
Here is a screenshot of the regression dialog box showing the new features highlighted with red boxes.

Lets go through each of these new features –

B.  The user can now let the regression tool know that the data ranges for X and Y have text labels (or variable names) in them.

C.  In earlier versions, the regression tool only computed the slope and intercepts, so there was no way of knowing how uncertain these numbers are. Now the users can specify confidence level as a percentage and the tool will compute the corresponding confidence intervals for each of the estimates (namely the slopes and intercept).

D.  Finally now there is a way to opt out of computing the residuals for all observations. This is beneficial to someone who is only interested in the slopes and intercept estimates and their statistics.

Following screenshot shows the output of the regression tool. 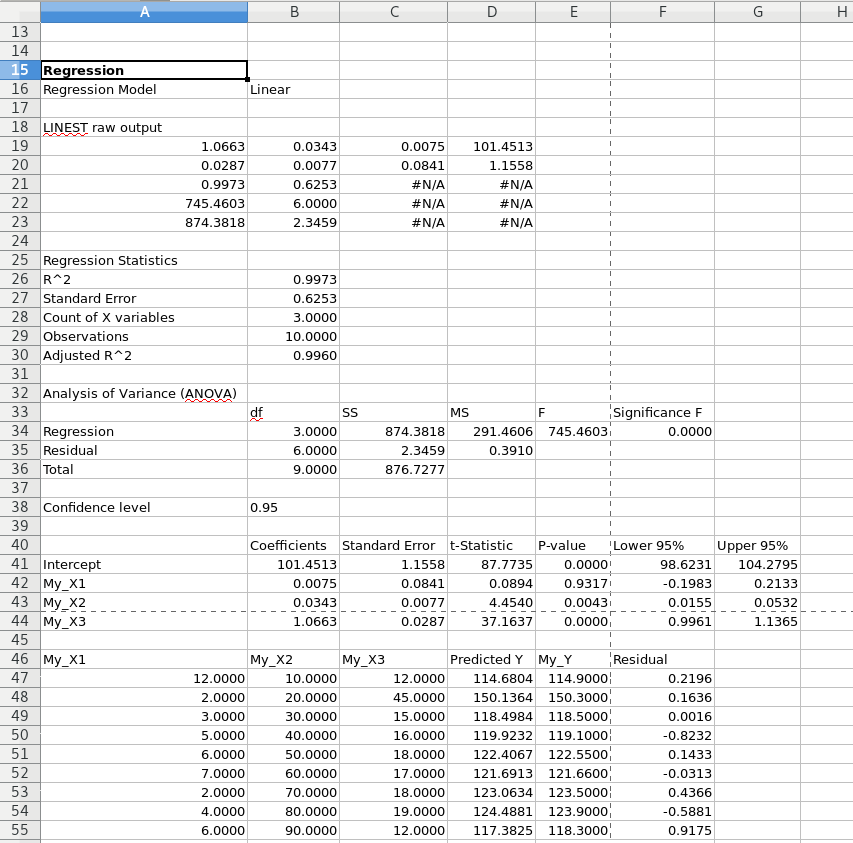 Note that the above is the result of a linear regression. We can do logarithmic and power regression with multiple X variables as well in the same way.

I would like to thank Collabora Productivity for their continuous support and encouragement to work on this feature.